The 1. FC Köln Foundation, known officially as the Stiftung 1. FC Köln, is a charitable and legal entity, which was founded on November 21st, 2009.

1. FC Köln is aware of its social and environmental responsibility as one of the most well-known and important organizations in Cologne. We are always considerate of those people in our regions that need our support beyond the realm of football. The 1. FC Köln Foundation is responsible for the various social engagements of the club.

The mission statement of the Foundation is characterized by the title of the FC Hymn: “Mer stonn zo Dir”. The phrase translates into “we stand by you”. It is the wish of FC to actively give back to the people and institutions of the region that have shown trust and loyalty to the club through bad times and good. It is with sport and through the expansive network of sports that people can become involved with treating social problems and come together to take care of his fellow men. 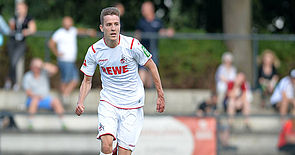 1. FC Köln have loaned out Niklas Hauptmann. The 24-year-old will play for Holstein Kiel in the upco...