Stadium Regulations of the RheinEnergieSTADION

Every football match has rules. The stadium has rules as well.

1. FC Köln would like all visitors in the stadium to enjoy the atmosphere of the match. This also means that visitors should respect the rules and regulations within the stadium.

The complete set of regulations can be seen in the link below: 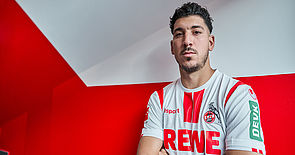 1. FC Köln have signed Dimitris Limnios. The Greece international has signed a deal until 2024. He w...